The Book of Daniel is without a doubt the prophetic key to Book of Revelation and all that it contains. And for that reason alone many study it in minute detail in an effort to discern the future that awaits the world. But at the same time they overlook the keys to what what we are to be doing in the interim as we await those future events. In many cases, those lessons are left on the “flannel board” in some Sunday school classroom. You may not be old enough to understand that reference but if you are, I am sure you remember the three Hebrew children. The Lord reminded me of the importance of their trial for us as we walk through this life and what an example they are for us as we face our fiery trials.

First He reminded me that in the face of personal danger they did not compromise His truth. They knew the death sentence that Nebuchadnezzar had decreed but they did not look for a way out; they stood firm in their faith.

Dan 3:16-18 16 Shadrach, Meshach, and Abednego answered and said to the king, “O Nebuchadnezzar, we have no need to answer you in this matter. 17 If this be so, our God whom we serve is able to deliver us from the burning fiery furnace, and he will deliver us out of your hand, O king. 18 But if not, be it known to you, O king, that we will not serve your gods or worship the golden image that you have set up.” ESV

I find it interesting that most of the trials that come into my life seem to show up when everything is going well, and so it was for these Hebrews. They had the king’s favor and had been placed in high positions. Not to mention that the reason for that was that they refused to compromise with respect to what the king had ordered them to eat (Dan 1:8). But that’s another story for the flannel board. Well, we all know the outcome but we need to reminded from time-to-time of the lesson.

They didn’t run from the trial. Is that what we do at the first sign of a trial in our life, or do we take charge and begin looking for a solution, a way out? Do we fight what God has allowed in our life or do we submit, trusting in His promise that He would never leave us nor forsake us. And that is just what Nebuchadnezzar saw:

Dan 3:24-25 24 Then King Nebuchadnezzar was astonished and rose up in haste. He declared to his counselors, “Did we not cast three men bound into the fire?” They answered and said to the king, “True, O king.” 25 He answered and said, “But I see four men unbound, walking in the midst of the fire, and they are not hurt; and the appearance of the fourth is like a son of the gods.” ESV 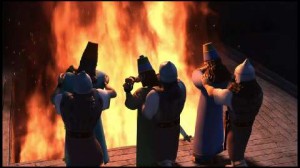 Isn’t that true today as well? As the bride of Christ we often go through life completely unnoticed by those in the world around us. Sometimes that’s because we are hiding our Christianity from them, but most of the time it’s because they are caught up in their own selfish pursuits and aren’t interested in us. But let a challenge come into our life and all eyes are upon us because most of the time they want to see if we “walk the walk” or just “talk the talk.” And those are the times we have the opportunity to follow Shadrach, Meshach, and Abednego.

As the king watched to see what would happen to them he saw the fourth person in the furnace; in the trial. There among them was Jesus! I prefer the KJV that records… and the fourth form is like the Son of God. We need to remember that He is there when our trial begins, He is with us throughout the trial, and He is standing there beside us when it’s finished (Heb 13:5). Isn’t that what we should be focused on in the midst of our trial? Let our faith be bold and ask Him what He is challenging us with and then let Him deal with it. That is what the Lord talked to me about.

Remember, they were bound with ropes before they were put into the fire. But when they came out something very subtle had happened.

Dan 3:25-27 25 He answered and said, “But I see four men unbound, walking in the midst of the fire, and they are not hurt; and the appearance of the fourth is like a son of the gods.” 26 Then Nebuchadnezzar came near to the door of the burning fiery furnace; he declared, “Shadrach, Meshach, and Abednego, servants of the Most High God, come out, and come here!” Then Shadrach, Meshach, and Abednego came out from the fire. 27 And the satraps, the prefects, the governors, and the king’s counselors gathered together and saw that the fire had not had any power over the bodies of those men. The hair of their heads was not singed, their cloaks were not harmed, and no smell of fire had come upon them. ESV

The only thing that had changed during their fiery trial was that the “ropes that bound them” were burned off and nothing else was even singed; they didn’t even smell like smoke. That’s the key to the fiery furnace. If we will trust in the Lord, submit to the trial, and not run from it He will free us from whatever it is that has us bound up. Yes, sometimes He just reaches down and unties our bonds, but there are those times when there is something much stronger that has us bound up and only a fiery trial will free us. Remember, everything that happens to us is used by God to free us from our selfish nature and draw us closer to Him. And while it’s easy to enjoy those times when He is blessing us, we can’t forget that in those times of trial we are to rejoice as well because we are also being blessed then:

1 Peter 4:12-13 Suffering As a Christian 12 Beloved, do not be surprised at the fiery trial when it comes upon you to test you, as though something strange were happening to you. 13 But rejoice insofar as you share Christ’s sufferings, that you may also rejoice and be glad when his glory is revealed. ESV

Keep this in mind the next time you feel the heat of the fiery furnace: We are not only being freed of our bonds, those around us are being touched by the glory of God in us that is revealed by our faith and trust in Him in the midst of the fire. And has the fire burns off our bonds, that’s the time we need to look around us because that’s when we’ll see our bridegroom the clearest.