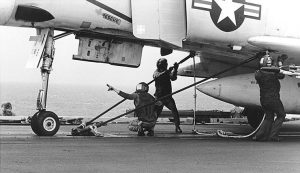 The price of a vital faith is a continuous struggle … Maxie D. Dunnam

We were created by God to grow. As Jesus’ bride we were recreated to grow, to become our whole selves in His image. That has put us in a state of constant tension.

As you move forward under the direction of the flight deck controller, he slowly guides you onto the catapult where a team hooks you up the the bridle. Then you slowly move forward over the shuttle until the bridle stops you. All the controls and instruments are rechecked and you are now under the control of the catapult officer who signals you to go to full power. As the engines spool up you feel the tension and then he signals for you to light the afterburners. One last check and you salute … it is no longer in your hands … you are suspended in tension awaiting hands you cannot see to send you forward.

Phil 3:12 Not that I have already attained, or am already perfected; but I press on, that I may lay hold of that for which Christ Jesus has also laid hold of me. NKJV

Verse 12 is one of those what I have heard referred to as a “hinge” verse that abruptly jumps up at you … Not that I have already attained, or am already perfected.

Our life as Jesus’ bride is a journey, a process of growing in Him. That’s why Paul said but I press on, that I may lay hold of.  What is he trying to lay hold of … that for which Christ Jesus has also laid hold of me. It’s the fullness of all that we have been given in Christ … everything! As His bride we must now become what we are … we can’t stay the same, we have to move forward … to work out our salvation with fear and trembling. That’s where we find ourselves … Caught In Tension!

The Word demands that we live in the now as those who have “died in Christ” to sin but are still sinners. God has accepted us by our faith and sees us a righteous, yet we’re in fact unrighteous and cannot in ourselves be righteous. That’s the tension. But as one commentator put it … it’s creative tension. We’re not caught by someone or something like victims, we’re drawn into that tension by our personal relationship with Jesus. He is like that catapult officer once we have saluted him. He has made us His own and His responsibility.

We start everyday right where we are, claiming confidently that Jesus has recreated us in His image but at the same time admitting that we haven’t become the fullness what He wants us to be (Romans 8:29). The response of many is to be overconfident and claim too much for ourselves or to walk in false humility, failing to claim our gifts. Either way we’re stunting our spiritual growth. That’s why Paul calls for a balance … but I press on!

We are called to walk in that balance, making no claim of perfection yet having an unshakable confidence that Jesus has made us perfect. That tension is like walking a tightrope, on the one hand naming and claiming our gifts while struggling against pride and the temptation of falling into self-justification.

We need to keep our eyes fixed on the catapult officer each and every day. Watching for him to swing his arm over and touch the deck, signaling our release. We are to leave the past behind and have no thought for tomorrow. Our focus is in the here and now, living the life He has given us today to the fullest. Once we hit the end of the catapult He puts things back into our hands and trusts us to follow His plan for the day.

It’s an exciting place to be … Caught In Tension!