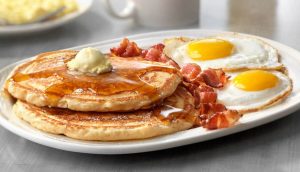 I have been studying the Word with respect to specific issues for the past few years and bouncing back and forth between the New and the Old. So, I decided last month to set aside a part of my morning time with the Lord and read through the Bible again in one year. I found an old journal I have not used from David Jeremiah and so I began as it went from a book in the Old to one in the New. And along with the schedule he placed key memory verses, of which this one caught my eye…

Jer 15:16 Thy words were found, and I did eat them; and thy word was unto me the joy and rejoicing of mine heart: for I am called by thy name, O Lord God of hosts.

I spent some time reflecting on how and where I had run across this verse before and the meaning I took away. So, this time I took some time and went a little deeper after the Holy Spirit challenged me… Did you have breakfast?

Looking deeper I was challenged by several key words in Jeremiah’s statement. First, the word word in Hebrew is dabar and as used here it means a whisper of a word we hear from God.  Next the word found is matsa, which as used here means was recognized (he recognized the Word because he was looking for it). The third key word is eat, which is akal and means devour (not just tasted but digested because he was hungry).

Let’s pause here for a moment and put these three words together. Jeremiah said that he heard a whisper from God and he recognized who it came from, which he devoured. Have you had that happen to you when all of a sudden the Word jumps off the page and speaks to you? I have, and as a teacher it immediately requires me to look at the deeper meaning; which is “always” there.

What Jeremiah relates is like Jesus parable of the “pearl”…

The merchant was just like Jeremiah. He was looking for the pearl because he knew it was in “that” field and it was more valuable than anything he had or would ever have. He was seeking goodly pearls as Jeremiah was seeking the Word of God, and when he found it he hid it in his heart. And in both cases they received it in “joy” (sasown), which reflects it being welcomed with gladness/cheerfulness.

Jeremiah found the Word because he was seeking (looking for) it because to him it was highly valuable and therefore when he received it in joy he hid it in his heart. So let’s put it all together… Jeremiah heard a whisper from God and he recognized who it came from because he was looking (listening) for it. And when he found it he received it with joy, devoured all of it and hid it in his heart. Why? Because I am called by thy name, O Lord God of hosts.

We can only imagine that it was a “wonderful” word to bring that much joy. Nope! It was a message concerning the ruining of Israel. I think I might not have received it with joy but I would have hidden it. Not Jeremiah. He knew it was a Word that he was to share and he did so in hope that the people would heed God’s warning.

It’s like that for us sometimes. The Word that jumps off the page and hits us between the eyes sometimes carries a difficult message to deliver or a challenge to overcome. But like Jeremiah, we too have been called (ordained) into His service and we need to respond in obedience like Jeremiah and Jesus…

John 4:34 Jesus saith unto them, My meat is to do the will of him that sent me, and to finish his work.

So, did you have breakfast this morning? Did you search for the “pearl” in God’s Word early? We’ll never find it if we don’t look, and we will never look unless we realize that it is a Treasure to be Shared!