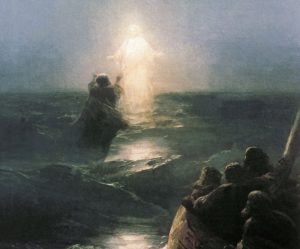 The other morning I was reading a familiar passage in Mark when a question filled my thoughts… Do You See Him? I thought about that and then looked deeper into the Word and found myself being challenged once again by the Holy Spirit.

The event is covered by Mathew, Mark, Luke, and John, but in each case there is a little nugget that doesn’t appear in the others. In fact, after spending some time meditating on what happened I realized that there was another event that preceded this one that really opened my eyes. God is so patient and longsuffering with us and we so often forget that He is in the midst of our trials.

Let’s start with the first event recorded by Matthew, Mark, and Luke. Here is Matthew’s account:

Matthew 8:24-27 And behold, there arose a great storm on the sea, so that the boat was being swamped by the waves; but he was asleep. And they went and woke him, saying, “Save us, Lord; we are perishing.” And he said to them, “Why are you afraid, O you of little faith?” Then he rose and rebuked the winds and the sea, and there was a great calm. And the men marveled… ESV

The impact on this event for us comes in a couple of places. First, note that they were in the midst of a great storm (Mark notes that the waves were breaking into the boat, so that the boat was already filling). At that moment it appeared as if Jesus was unaware of their situation. When they cried out He immediately responded, but He challenged them before He took action… And he said to them, “Why are you afraid, O you of little faith?” Then He took action on their behalf.

Now let’s move forward in time and once again we find a boat on the sea, a great storm, and Jesus is nowhere in sight. We’ll use Matthew’s account here as well but there is something in Mark’s account that challenges us to look a little deeper.

Matthew 14:22-32 Immediately he made the disciples get into the boat and go before him to the other side, while he dismissed the crowds. And after he had dismissed the crowds, he went up on the mountain by himself to pray. When evening came, he was there alone, but the boat by this time was a long way from the land, beaten by the waves, for the wind was against them. And in the fourth watch of the night he came to them, walking on the sea. But when the disciples saw him walking on the sea, they were terrified, and said, “It is a ghost!” and they cried out in fear. But immediately Jesus spoke to them, saying, “Take heart; it is I. Do not be afraid.” And Peter answered him, “Lord, if it is you, command me to come to you on the water.” He said, “Come.” So Peter got out of the boat and walked on the water and came to Jesus. But when he saw the wind, he was afraid, and beginning to sink he cried out, “Lord, save me.” Jesus immediately reached out his hand and took hold of him, saying to him, “O you of little faith, why did you doubt?” And when they got into the boat, the wind ceased. ESV

Like most of us, as I read both events in my mind I was just seeing and hearing what I had always seen and heard. The disciples got in trouble, called out to Jesus, He saved them, and then rebuked them for having little faith. But Mark said something that gave me a whole new perspective … Jesus saw them.

Mark 6:47 And when evening came, the boat was out on the sea, and he was alone on the land. And he saw that they were making headway painfully, for the wind was against them…

Here’s the message for us. The first time Jesus was there with them and in their fear He calmed the sea but only after He challenged their lack of faith. The second time Jesus wasn’t there and He wasn’t sleeping but Mark adds something important…

Mark 6:48 And about the fourth watch of the night he came to them, walking on the sea. He meant to pass by them …

Nothing in our life slips by Jesus. We have His Spirit with us every moment of every day and night and He hears us when we cry out. But, His Spirit never lets us stay in one place. He is always challenging us to step up another notch. Just like Jesus walking on the water. This time He wasn’t with them and they had to face their challenge all alone. Then when He did come He meant to pass by them! Would they remember the lesson of the first storm at sea? Their faith needed to stretch to the next level and so it is with. Every challenge we face requires a higher level of faith and trust.

God’s plan for our spiritual maturity is founded on an every increasing level of faith on our part. The challenges get tougher as we move through this life and yesterday’s faith will never be enough… that’s what “stretching” your faith is all about and why we need to understand Romans 8:28.

Romans 8:28 And we know that for those who love God all things work together for good, for those who are called according to his purpose. ESV

It doesn’t mean the all things will just work out for good. It takes our being obedient to the Holy Spirit when those “things” (those raging winds and seas) show up. We need to stand in faith looking to Jesus the author and finisher of our faith; He’s done it in the past and will do it now and in the future. Everything that happens in our life is either caused by or allowed by the Lord.  Remember it was Jesus who sent them out alone as an integral part of their journey to spiritual maturity… ever increasing faith.

Let’s learn to call on Him and stand fast in faith as we wait and look for His presence and His stilling hand in the midst of our storms … Yes I See Him.