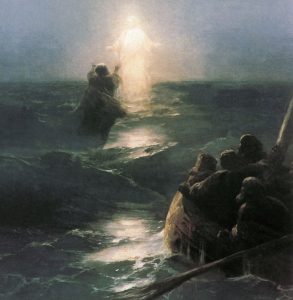 The picture of Jesus walking on the water is so familiar to us that we sometimes miss the subtle message it contains. Let’s set the picture once again. The wind was boisterous, the waves were high and the disciples must have been wondering why Jesus was so direct when He told them to get into the boat. The KJV says that He “constrained” them to get into the boat; compelled (pressured, made) them. In other words, Jesus commanded them to go to the other side of the bay.

That’s the first thing to consider. Jesus “sent them” to the other side, knowing they would be in the midst of a dangerous storm. The disciples didn’t question Him, they got in and went. How many times have we been told “to go” and we stopped to question Him? How many times have we balked because it looked like we were being told to go into a storm?

Matt 14:22 Immediately Jesus made His disciples get into the boat and go before Him to the other side, while He sent the multitudes away.

I think we can be pretty sure that there was some serious questioning going on in the boat, especially because they were out there in the dark, sometime around 3 AM. Then, all of a sudden out of nowhere, they saw Jesus walking toward them on the top of the waves.

Matt 14:25 Now in the fourth watch of the night Jesus went to them, walking on the sea.

That’s the next thing to consider. No matter what the circumstances surrounding us are, God either caused them or He has allowed them. But in either case, just like it was for the disciples, no matter what the difficulties in our life are, Jesus comes to us in the midst of them. The question is, how do we respond?

Peter recognized Jesus and immediately turned and began to go to Him. Is that our first response or are we like the other disciples who considered the wind and the waves and stayed where they were?

Matt 14:30 But when he saw that the wind was boisterous, he was afraid; and beginning to sink he cried out, saying, “Lord, save me!”

But then, like we do many times, we take our eyes off of Jesus and begin to debate with ourselves… Did He really say that? Is it His voice I’m hearing or is it the enemy leading me the wrong way? Is it my voice telling me what I want to hear? We once again look at our circumstances, our challenge, and begin to doubt. We forget that He is in control of all things and we become overwhelmed and lose our focus on Jesus. We forget the most important thing.

Peter saw Jesus in the midst of the storm, coming to rescue them, and he abandoned his circumstances and reached out to Him. Was he reckless? No doubt he was, because if he would have stopped to consider the wind and the waves he most likely would have stayed in the boat. That’s how we have to be… reckless. We need to put everything in Jesus’ hands and by faith step out and keep our eyes on Him and not our circumstances. The moment we consider where we are and what is happening we end up like Peter.

Matt 14:1 And immediately Jesus stretched out His hand and caught him, and said to him, “O you of little faith, why did you doubt?”

But Jesus never let’s our circumstances completely overcome us. We are in their midst for a reason and the only way we will get through them is to follow Him. If only that were easy to do in the midst of the storm. So often we set out well but give up along the way, just like Peter. But Jesus never gives up and His grace is more than enough. He is there to reach out and lead us back to the boat.

Matt 14:32 And when they got into the boat, the wind ceased.

Either Peter walked back to the boat with Jesus or Jesus carried Him, the result is the same.

Jesus will see us through our storms, but did we learn the lesson He was teaching us? I wonder if the same set of circumstances occurred again if Peter would view them differently? My guess is that the same circumstances would not come up again. I have always found in my life that each new challenge takes more faith than the last one. It’s the only way for our faith to grow stronger and more committed. But I am equally convinced that whatever new challenge Jesus would put forth, Peter would be able to look back at that moment Jesus saved him from the wind and waves and know that He was always there.

If you debate for a second when God has spoken, it is all up. Never begin to say – “Well, I wonder if He did speak?” Be reckless immediately, fling it all out on Him. You do not know when His voice will come, but whenever the realization of God comes in the faintest way imaginable, recklessly abandon. It is only by abandon that you recognize Him. You will only realize His voice more clearly by recklessness.