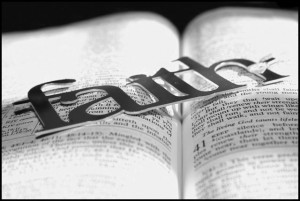 Having just finished a long study of the Old Testament, and the prophets in particular, the Lord has taken me forward once again to the Book of Romans. But this time through He is taking me slowly by the hand, verse-by-verse. And this past week I have been meditating on this verse at length:

Rom 1:17 “For therein is the righteousness of God revealed from faith to faith; as it is written, The just shall live by faith.” KJV

In the next couple of updates I want to pass along what the Lord has been revealing to me as it has really helped me get a much better grasp on “faith.” So, let’s start with what faith “is not.”

The Greek translation of that phrase gives us a much better understanding of what Paul is saying… ek pisteos eis pistin. It means: out of faith and into faith. In context it means that God doesn’t speak to the lost directly out of heaven, He speaks out of the faith of one heart into the faith of another. That’s how He communicates His righteousness… out of the testimony of one to another. Or put another way: there isn’t one person on the earth who was saved without hearing the testimony of another. Everyone responds to a seed that has been sown by someone; even by the one who left a tract that had been written and published by others.

Yes, God has the power to come to the world and save everyone in the twinkle of an eye. But He has chosen not to do that because He has called us to be His partner in that process. And that process is set in motion and completed… from faith to faith. Paul underlined that in his second letter to the church at Corinth:

It is no more complicated than that. We are to reveal the righteousness of God to others from  our heart to their heart. We are to communicate our faith by our testimony. We are to sow the seed that will reveal the righteousness of God to the unbeliever. And as we commit ourselves to that process a wonderful thing happens… the more we communicate that truth to those around us, the more we will desire to communicate it. We will come to that place where we realize and accept the truth:

As the bride of Christ, we have been called to partner with Him to reveal the “righteousness of God” to a lost and dying world… ek pisteos eis pistin… from faith to faith… out of the faith of  one heart into the heart of another.

We’ll look at the last part of this verse next time and I think with this in mind it will give you a deeper understanding of what Habakkuk and Paul were telling us.