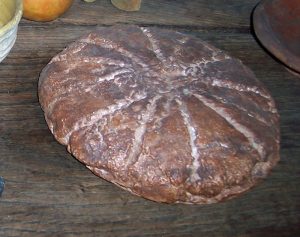 There they were, in a boat having crossed the Sea of Galilee and, after what they had just witnessed, what were they thinking about?

Matt 16:5 Now when His disciples had come to the other side, they had forgotten to take bread.

Mark tells us that they had just one loaf in the boat. And as they were wondering what to do, Jesus’, overhearing their conversation about “natural things,” spoke to them about “spiritual things.”

6 Then Jesus said to them, “Take heed and beware of the leaven of the Pharisees and the Sadducees.”

He was referring to the spread of false doctrine by Israel’s leaders, but they missed the point and “reasoned” that Jesus was upset because they had forgotten to bring the bread.

7 And they reasoned among themselves, saying, “It is because we have taken no bread.”

So, Jesus then reminded them of what they had just witnessed, and challenged them with their lack of faith in Him.

How could they so soon forget? Did they think He would let them starve? Had He not taught them to pray.. Give us our daily bread? They had just witnessed Jesus providing bread for 9,000 people from 12 loaves of bread and yet they were concerned with just one loaf of bread in the boat. Jesus was symbolically using bread to make His point as He had done before (e.g. the Bread of Life in John 6). He wanted them to understand that they were to depend upon Him to supply all their needs, not just the physical ones. He was referring to the Pharisees and Sadducees who had just challenged Him by asking for a sign (Matt 16:1).

11 How is it you do not understand that I did not speak to you concerning bread? — but to beware of the leaven of the Pharisees and Sadducees.“

Bad doctrines act on the soul just like leaven does in bread. It spreads silently, unnoticed throughout the whole loaf. The leaven of the Pharisees produced hypocrisy, pride, and envy, while the false doctrine of the Sadducees denied the existence of the spiritual world, the immortality of the soul, and the resurrection. They both hid their doctrines that were difficult to detect while they slowly act to bring the “soul” under their control. Jesus wanted them to understand that when they allowed themselves to be concerned with “natural” challenges it opened them up to have a lack of faith in Him. Though they only had one loaf of bread with them, they ignored the fact that they had The One Loaf with them that could meet all of their needs, and in particular the leaven of the Pharisees and Sadducees.

12 Then they understood that He did not tell them to beware of the leaven of bread, but of the doctrine of the Pharisees and Sadducees.

Jesus teaches us by the Spirit of Wisdom by opening up the Word of God. Even though He did not tell them plainly, they understood because He opened up their hearts to the “Spirit of Revelation.” And He is doing the same for us today as the leaven of the Pharisees in the church today is presenting the wrong interpretation of the Bible, and the leaven of today’s Sadducees is the liberal intolerance of the Truth of the Bible.

It is up to each one of us to realize that our “understanding” is often inadequate because we are lacking in spiritual knowledge. But not because we haven’t had, like the disciples, many opportunities to learn. It’s because we have not taken advantage of those opportunities. How often we forget our individual lessons of the “loaves and fishes,” those times when we faced with the challenges of this world and failed to remember and discern the Truth. Jesus’ words ring loud and clear to His bride today… How is it you do not understand?

The answer is in our choosing to focus on the challenge before us and not on the One who has the answer for the challenge. It lies in the fact that we fail to remember that we always, in every situation, have The One Loaf in the boat with us that will meet our “every” need. Do we have faith in that One Loaf or do we seek the answer somewhere else? And, as Jesus pointed out, that failure of our faith is directly related to our lack of spiritual understanding, which is the result of our allowing the “leaven” of the Pharisees and Sadducees to infiltrate our faith.

As watchmen on the wall we need to stand our guard!