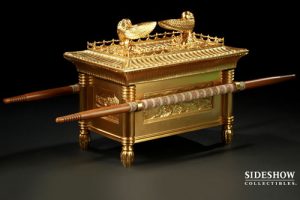 Sometimes the Holy Spirit uses one thing to remind me of something else. It happened again last week as I was thinking about the word “propitiation.” In the Greek it’s the word hilasmos, which means “covering” as used by both John and Paul…

1 John 2:2 He is the propitiation for our sins, and not for ours only but also for the sins of the whole world. ESV

As I was thinking about that the Holy Spirit took me back to the Holy of Holies where the Ark of the Covenant contained the ten commandments, the manna and Aaron’s rod. Picturing it in my mind I went into my files and pulled up a picture of the Ark as He reminded me what it really represented.

Within the Ark were the broken tablets of the “Law” and over it was the “Mercy Seat” and over it was the Shekinah Glory of God, which was symbolic of His all-seeing eye. Had God looked down on the Ark and seen the broken Law and the sin it represented He would have responded in His wrath for sin cannot exist in His presence. No, as He looked down between the Ark and His glory was the Mercy Seat, guarded by two kneeling angels and the sprinkled blood of the atonement that “covered” the sin. The blood was all that God saw.

Ps 32:1 Blessed is the one whose transgression is forgiven, whose sin is covered. ESV

But what He drew my attention to was the two kneeling angels on top of the Mercy Seat. And then it hit me and I went to the tomb.

John 20:11-12  But Mary stood weeping outside the tomb, and as she wept she stooped to look into the tomb. And she saw two angels in white, sitting where the body of Jesus had lain, one at the head and one at the feet. ESV

They were no longer kneeling because the final sacrifice had been made and God no longer had to look down at the Mercy Seat because Jesus was risen. No longer did the blood of bulls and rams need to be sprinkled on the Mercy Seat. Jesus had shed His blood on the cross.

If we think about it, before Jesus paid the price for our sin, God looked down and the blood covered our sin. But it was blood that had to be sprinkled every year to “atone” for our sin. Now He looks down and sees Jesus, the One who has “atoned” for our sin.

This is my opinion… but I just might be right.

God put angles at the entrance to the Garden of Eden with a flaming sword when Adam and Eve were expelled so that they could not come back into God’s presence having sinned. Then those angels were placed on top of the Mercy Seat to guard against man coming into God’s presence covered in their sin. But now that Jesus has shed His blood and risen, no longer a “propitiation” (covering) of our sin but an “atonement” for our sin, the angels no longer need to protect the covering. And therefore they were just sitting there in the empty tomb to ask the question…

Luke 24:4-6a While they were perplexed about this, behold, two men stood by them in dazzling apparel. 5 And as they were frightened and bowed their faces to the ground, the men said to them, “Why do you seek the living among the dead? 6 He is not here, but has risen… ESV

I can hear them now… Don’t you remember what the Ark represented and why we were there? Why are you looking for Jesus in here? You can see that we don’t carry a flaming sword any more (Gen 3 23-24), because The Garden is open to you once again… come on in and find the One you are looking for… He lives in The Garden…  in your heart.

We need to remember that when we look around we still see our sin, God looks down and all He sees is Jesus. It begs the question; why don’t we spend more time with Him in The Garden?