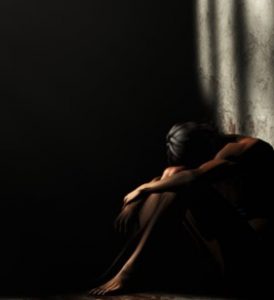 We have all experienced those times when it feels like we are totally alone in our situation, cut off from everyone and everything. It’s at those times that we are most apt to forget that we are “not alone.” No better picture has been painted than the one I read this morning from A. B. Simpson, which I will let him pass on to you. Jesus knows our isolation.

“Once, it is said, a timid prisoner was sentenced for some breach of discipline to spend the night in a dark and lonely cell so terrible in its isolation and its gloom that it was the one horror of the prison, and was dreaded almost worse than death itself. He was borne away in chains to his dark and dreary dungeon, and at last flung in upon the damp floor while he felt the loathsome air creep over his vitals and almost choke out his life. As he heard door after door close behind him, and knew that the was there for one hopeless night, far removed from every human voice or ear, bur tied underground in a living tomb, he sank upon the floor with a gasp of despair and his very reason for a moment seemed to fail him. Then suddenly he thought he heard above him the sound of footsteps, and as he listened he knew that someone was pacing the floor above with measured steps. It was an infinite relief, although he knew not who might be there. And as he listened the steps ceased and a low voice was heard speaking through the floor to him, and saying, Fear not, I am here; I am the chaplain of the prison. I heard of your terrible fate. I learned that you were here. I knew that you could not stand it alone, and  want you to remember that I will  be here as long as you remain. Instantly the dark vault was transformed into a place of rest. He was no longer afraid. He was no longer alone. Another heart was throbbing by his side. A friend was near with love and sympathy. Beloved, listen in the darkest hour and the loneliest night and you, too, will hear Him softly saying, And surely I am with you always, to the very end of the age (Matt 28:230); and you will answer back, Even though I walk through the valley of the shadow of death, I will fear no evil, for your are with me” (Ps 23:4).

Yes, we may think we are alone in our hour of isolation but it is not permanent (I walk through the valley) and it is not real, it is only the “shadow of death.” We only need to listen for His footsteps… we are never alone!