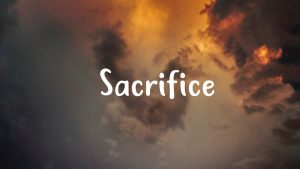 There are three key words that seem to capture the meaning of the sacrifice Jesus made on the cross. Paul addressed them in his letter to the Galatians:

Gal 2:20 I have been crucified with Christ. It is no longer I who live, but Christ who lives in me. And the life I now live in the flesh I live by faith in the Son of God, who loved me and gave himself for me. ESV

The KJV version puts it in the present tense; the continuing result … I am crucified. The life we now live in the flesh we live by faith in Jesus. The three words that capture the meaning of being crucified with Jesus are : Pardon, Power, Partnership.

Pardon – Pardon means being forgiven for our past sins and freedom from the law. It also instills in us a strong desire not to sin again.

Col 2:13-15 And you, who were dead in your trespasses and the uncircumcision of your flesh, God made alive together with him, having forgiven us all our trespasses, by canceling the record of debt that stood against us with its legal demands. This he set aside, nailing it to the cross. He disarmed the rulers and authorities and put them to open shame, by triumphing over them in him.  ESV

Power – Power comes when we surrender to the lordship of Jesus. Our will comes under control of His mind and we walk in His power. We no longer have to depend upon our own resources, His power sustains us.

2 Cor 10:3-6 For though we walk in the flesh, we are not waging war according to the flesh. For the weapons of our warfare are not of the flesh but have divine power to destroy strongholds. We destroy arguments and every lofty opinion raised against the knowledge of God, and take every thought captive to obey Christ, being ready to punish every disobedience, when your obedience is complete. ESV

Partnership – Partnership brings power, but it also brings suffering. Being crucified with Jesus we enter into His suffering for the sake of His bride.

Col 1:24 Now I rejoice in my sufferings for your sake, and in my flesh I am filling up what is lacking in Christ’s afflictions for the sake of his body, that is, the church ESV

As Jesus’ bride we must guard against the temptation that is prevalent in the church to take Jesus’ crucifixion as a symbol or to just equate it to baptism. It often gets treated as something that is automatically a part of salvation instead of being a central element in our “living it out” day by day. Being crucified with Jesus means that we are to share in the life that led Him to the cross, forgetting what lies behind and stretching and straining for what lies ahead with Pride, Power and Partnership as we press toward … the prize of our high calling in Christ … with whom we have been crucified.