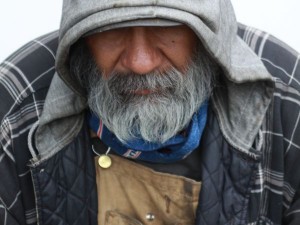 After the Civil War a man went to Texas and settled on a piece of land on which were discovered gushers of oil. His wealth became staggering, even by today’s standards. He passed away and years went by until it was determined that he had a sister. But by the time the lawyer located her address she had passed away, leaving only one grandson who turned out to be a beggar living on the streets of Philadelphia. After much background work, the New York lawyer in charge of estate determined that in fact, the beggar was the grandson.

As he walked down the street he spied the man huddled in a corner and marveled… that man is worth $30 million dollars. He approached the man and told him the story, informing him that he had just opened a temporary account in his name for $1 million upon which he can immediately draw. The rest of the money was in the bank awaiting his instructions. The lawyer watched as the beggar, with great joy, acknowledged his identity and smiled at his good fortune. The new millionaire could immediately move to enjoy all that had been placed in his hands that could completely change his life.

But, to the amazement of the lawyer, he chose to stay where he was. While he had everything he needed to completely change his life for the better, he chose instead to remain in his old haunts, among his old companions.

Let’s face the fact that many Christians, many of the bride of Christ, live the same way. They have been given all things in Christ but they don’t avail themselves of the riches and power He has given them to change their life. They are content to just remain in their new “position” in Him. They, like the beggar, have access to it all but they choose to ignore it. The beggar should take a bath, put on a clean suit, and leave his old haunts forever. He should joyfully enter into his new possessions, buy a home, and start a new life that is worthy of his new status. So should the bride of Christ. Her normal life should be centered on enjoying her new riches. She should be focused on growing up in Him. This is the path that Jesus has prepared for every true believer, and He has provided everything they need to walk in it.

So why does a Christian act like the beggar?

Rom 6:11 Likewise reckon ye also yourselves to be dead indeed unto sin, but alive unto God through Jesus Christ our Lord.

The Greek word logizomai is a mathematical term meaning to calculate with one’s self, to reflect, or to think of the results that flow out of some given fact. We are to “reckon” and act upon the facts, despite any obstacles that may be in the way. That means we are to move beyond our “position” in Christ (having been given everything; salvation) and focus on our “condition” (live our life alive to God; becoming conformed to His image). That is what it means to move on beyond the Cross; to live. Go back just one verse.

Rom 6:10 For in that he died, he died unto sin once: but in that he liveth, he liveth unto God.

Since Jesus can never die again, neither can we; we can never suffer the second death (spiritual death). Since Jesus has risen and lives for God, and since we are “positionally” in Him, we “live” for Him; that is our “condition.” But that won’t happen if we don’t reckon ourselves dead to sin and alive to Him.

Far too many of the bride of Christ are still like that beggar, choosing to stay where they are instead of taking up their new position and all that goes with it. We need to put our faith in the One who paid the price for all that we have been given, a price we will never have to pay. We need to place our faith in the supernatural fact that we are dead to sin and alive to God if we want to see the supernatural results of a life in Him. Why continue to sit in the alley of want when you can walk in the path of blessing, in the company of the One who made it a reality.

Because of your Position in Christ, you need to check your Condition in Life. They are wonderfully connected!

2 Responses to “Position Versus Condition”

Download a PDF or Kindle ebook of "The Foundations of Faith. It's free gift to you — all that we ask is you Tweet or Share on Facebook that you are reading Tom’s book and help us spread this critical message to the bride of Christ.