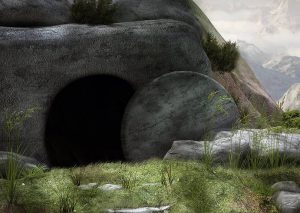 The tomb was closed with a rock and a Roman seal. There was nothing going to get in or out with a Roman guard standing by to ensure that it stayed sealed, or so the Pharisees thought. But they had not planned on the Word of God being infallible and the stone was rolled away and the tomb was empty.

But that begged the question… why roll away the stone?

The truth is that it was never necessary for the stone to be rolled away. The power that allowed Jesus to walk through the wall in the upper room was the same power that resurrected Him before the stone was rolled away. He had risen and come forth before that stone was even touched. The reason was not that it had to be moved to let Jesus come out. It was rolled away so the women could come in and see the proof of His resurrection.  When they came, Jesus did not come out of the opened tomb to meet them, He was coming from the garden where He had already been. And there is an important message in this for us.

Jesus can pass through the stones of any difficulty, and if we are walking with Him we can walk right through them as well. It doesn’t matter whether our stones are spiritual trials, temptations or worldly obstacles in our path. We, just like Jesus, do not have to wait for them to be “rolled away.” We can rise above them with Him, and like Him they can be turned into greater victories and blessings.

Matt 28:2-6 And, behold, there was a great earthquake: for the angel of the Lord descended from heaven, and came and rolled back the stone from the door, and sat upon it. 3 His countenance was like lightning, and his raiment white as snow: 4 And for fear of him the keepers did shake, and became as dead men. 5 And the angel answered and said unto the women, Fear not ye: for I know that ye seek Jesus, which was crucified. 6 He is not here: for he is risen, as he said. Come, see the place where the Lord lay.

We need to be like that mighty angel sitting upon the stone that had obstructed the way to Jesus. He is risen above our challenges and He has seated us in heavenly places with Him, high above the stones in our life…

Eph 2:5-6 Even when we were dead in sins, hath quickened us together with Christ, (by grace ye are saved;) 6 And hath raised us up together, and made us sit together in heavenly places in Christ Jesus:

Why roll away the stone? To let us enter in as a constant reminder that He is risen. The next time Satan shows up in our life, we just need to point to the open tomb and that big useless rock that has been rolled aside.