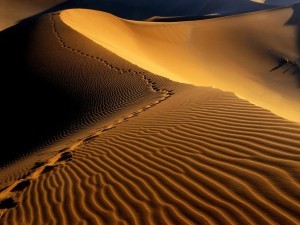 Have you ever or are you now in one of those “in-between” times? Those periods between hearing God’s promise and seeing it come to pass that can put a real strain on our faith. I’ve been there so many times that you would think by now I’d have it down pat. Not even close. The “cares of this world” always seem to find a way to get involved. But that doesn’t mean that God hasn’t given us the answer; the key to avoiding those cares during the in-between times.

Consider for a moment David’s words when he found himself in this very situation:

Ps 123 Unto thee lift I up mine eyes, O thou that dwellest in the heavens. 2. Behold, as the eyes of servants look unto the hand of their masters, and as the eyes of a maiden unto the hand of her mistress; so our eyes wait upon the Lord our God, until that he have mercy upon us. 3. Have mercy upon us, O Lord, have mercy upon us: for we are exceedingly filled with contempt. 4. Our soul is exceedingly filled with the scorning of those that are at ease, and with the contempt of the proud.

David uses an interesting metaphor here as he compares our looking up to God to a servant looking at the eyes of his master or a maid to her mistress. He is referring to the fact that the master or mistress seldom used verbal commands to their servants. In the midst of whatever they were doing the commands were always given by slight, almost imperceptible hand gestures so that it would not interrupt what they were doing.

How often has He spoken to you in His Word and then become very silent? I think He does that with me because if He continued to speak I would find a way to pass it along in one way or another. Or as Pastor Jon Courson put it: Wow, God spoke audibly to me; in other words, shifting the focus from the master to the servant. But thank God He doesn’t work that way.

He wants us to keep our eyes on Him all the time as the servant constantly observes his master. If we are looking all around for answers we are certainly going to miss those subtle signals coming from the throne that contain all the direction we need. And that makes it critical for us to stay in the Word and in prayer, especially in those in-between times. Those very difficult times when waiting is the last thing we want to do as the world and all those around us seem to push and pull for answers and action.

And when it comes to waiting I am always mindful of the verse that the Lord used when He began WalkWithGod Ministries all those years ago:

Isa 40:31 But they that wait upon the Lord shall renew their strength; they shall mount up with wings as eagles; they shall run, and not be weary; and they shall walk, and not faint.

Waiting for God, however, is not laziness. Waiting for Him is not going to sleep and trying to forget. It’s not giving up. It first and foremost means “activity under command.” That means readily waiting for the next command and doing nothing of our own volition until that command is given. Waiting here carries with it the idea of “entrenching;” digging in — digging into God.

And how long are we to wait?

… so our eyes wait upon the Lord our God, until that he have mercy upon us.

Our waiting is to be a continual process as we look to Him in prayer for our answers; our deliverance. It is only His mercy in those times that will ease the pressure and provide us peace. David was there:

Perhaps it makes a bit more sense in this day and age if we consider the New Living Translation:

3. Have mercy on us, Lord, have mercy, for we have had our fill of contempt.4 We have had more than our fill of the scoffing of the proud and the contempt of the arrogant.

Despite all that was going on around him, David’s only option was to pray for God’s mercy until He answered. And it’s no different for us. In our waiting or our distress we need to humble ourselves before the Lord and lift our prayers of petition rather than taking the situation into our own hands. It is very likely that He is using the situation to draw us closer to Him and make us more dependent upon Him; forsaking our own understanding. And coupled with those prayers must” be our faith; we must trust and believe in His mercy.

The word “until” in verse 2 is the Hebrew word ad and it means: even to; as long as; as far as in distance or time. It carries with it here the understanding of perseverance in prayer; continuing in hope and resigning our will; refraining from dictating to God and patiently waiting on Him. It reminds me of the woman who came before the judge continually:

Luke 18:2-7 Saying, There was in a city a judge, which feared not God, neither regarded man: 3 And there was a widow in that city; and she came unto him, saying, Avenge me of mine adversary. 4 And he would not for a while: but afterward he said within himself, Though I fear not God, nor regard man; 5 Yet because this widow troubleth me, I will avenge her, lest by her continual coming she weary me. 6 And the Lord said, Hear what the unjust judge saith. 7 And shall not God avenge his own elect, which cry day and night unto him, though he bear long with them?

That’s where God wants our heart; continually and persistently seeking after Him. If we will take David’s words to heart there is a very clear message for us regarding how we should deal with the waiting.

David’s prayer was that he would be able to keep his eyes on the Lord instead of looking at the situation and conditions that surrounded him. It should be our prayer as well. Jesus has established His Kingdom and it is in full operation around us. And in the midst of all the chaos He has opened the Holy of Holies for us to come boldly before His throne, expecting Him to show His hand strongly on our behalf.

And after many trials, struggles and bouts of impatience I’ve finally learned that waiting on Him is the only way to make it through the In-between Times. And that brings me to the matter of practicing what I preach.