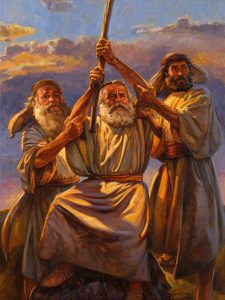 In studying the events shortly after the Israelites crossed the Red Sea and their celebration of deliverance from Egypt it struck me, once again, how relentless the enemy is. They struggled with all the issues that surrounded them “departing” from their world, just like we do in departing from the world in which we live. In their wilderness they dealt with all the natural issues of food and water; complaining in the process. But all along God fought their battles for them and took care of their provision. That is until it was time for them to begin taking responsibility for their lives and begin trusting God completely.

I was especially struck by reading once again about the first time Israel had to go out and defend itself; act upon God’s Word and trust in His provision (Ex 17:8-16). Here, for the first time since leaving Egypt, just after crying out to God for water at Rephidim (which is an incredible example of Christ’s sacrifice), they were once again faced with the enemy. And if you look just a little deeper into the battle you find a great testimony for us.

You remember the events. God told Moses to send Joshua into battle with Amalek while he, Aaron and Hur went up on top of the hill overlooking the battle where Moses was told to hold up the rod of God to ensure victory. And as he did Joshua prevailed. But when he tired and his hands were lowered, Amalek prevailed. It was then that he had to sit on a rock and let Aaron and Hur hold up his hands until the battle was won.

Certainly, sitting on the rock when he got tired is familiar to us as we sit on (trust in the Word of God) “The Rock” when we grow weary in our battles.  And there are times when we need others to stand with us and hold up our hands to the Lord as the situation seems to overwhelm us. I think we’ve all experienced this event in Israel’s journey. But I want to focus for a moment on a part of the battle that I believe is critically important for us to remember today as we struggle through the difficult times that are coming.

Listen to what God said to Moses after Joshua won the battle:

Ex 17:14-16 And the Lord said unto Moses, write this for a memorial in a book, and: for I will utterly put out the remembrance of Amalek from under heaven. 15 And Moses built an altar, and called the name of it Jehovah-Nissi: 16 For he said, Because the Lord hath sworn that the Lord will have war with Amalek from generation to generation.

First note that God said He would utterly put out the remembrance of Amalek from under heaven. That meant that God would put “sin” utterly out of the remembrance from under heaven; earth. That He would accomplish with Jesus’ sacrifice on The Cross. Then He specifically told Moses to rehearse it in the ears of Joshua; it is critically important, don’t forget it! Then right after Moses had built an altar to Jehovah Nissi (the Lord is my banner), God swore that He would have war with Amalek from generation to generation.

So, what does it mean for us since we are one of the generations affected by this memorial since, as the bride of Christ, we are grafted into the olive tree (Israel)?

Consider that Amalek was the grandson of Esau and his name means: the people who licketh. As Esau licked at the bowl of stew prepared by his brother (his craving for the natural things of the world), he gave up his birthright (his spiritual inheritance). And generation after generation the decedents of Esau (Amalek) have hounded Israel.

Yes, God dealt with Amalek (sin) once and for all on The Cross, but it continues to “lick at us” because the enemy is relentless in his war with the Lord from generation to generation. And that sin is constantly “licking at each of us,” even though Amalek has been defeated and his future is certain.

The Amalekites were a robber nation and that is what sin is today for the bride of Christ. It continues to try and rob us of our daily relationship with our bridegroom. It constantly licks at us, causing distraction that pulls us away from spending time with Jesus in the Holiest Place and from hearing the word of His Spirit. His Spirit that is a “banner over us.”

The lesson for me, as I meditated on these thoughts, is that we need to remember each day that we are in a spiritual battle with Amalek. But like for Moses, Jehovah Nissi is there during our battle with His banner of victory over us. We must constantly remind ourselves that although Amalek’s future has been settled, he has not been removed from the earth. But we are victorious over him because God has spoken and His banner has been raised over us. We can walk out our journey with Him in peace if we will remember that and stand on His provision.

John 16:33 These things I have spoken unto you, that in me ye might have peace. In the world ye shall have tribulation: but be of good cheer; I have overcome the world.

Amalek has been defeated so let us walk in victory!