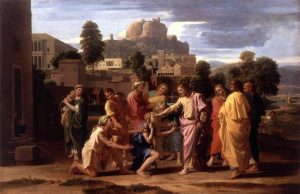 Jesus had left Jericho and was making His way to Jerusalem and there were two blind men, one of them being Bartimeus, who kept calling out to Him while the crowd tried to stop them…

They continued to call out in faith to Jesus all the more, acknowledging Him as the Son of David … the Messiah. In response, Jesus stopped the whole procession to pay attention to them…

Immediately their response was…

There is another translation of this verse that adds… that we may see you. They put voice to their faith in the One they knew could make them whole.

Matt 20:34 And Jesus in pity touched their eyes, and immediately they recovered their sight and followed him.
ESV

These two blind men asked in faith, they heard their answer in faith, and they walked after Jesus in faith.

These men must have heard of Jesus and the healings He had performed. One wonders if they also knew the words of Isaiah and were standing in faith in the face of the One who was headed their way – the Son of David.

Isa 29:18 In that day the deaf shall hear the words of a book, and out of their gloom and darkness the eyes of the blind shall see. ESV

Their action from beginning to end is steeped in strong faith. That faith was captured by the French Master, Nicolas Poussin, in his famous painting. The story is told of a poet and an artist who were looking at the painting and the artist asked asked him to relate what he saw as the most remarkable thing in the painting. The poet responded by noting the excellent presentation of the figure of Christ, of the grouping of the people, and the expressions on their faces. But the artist pointed to the corner of the canvas  where Poussin had painted a discarded cane lying on the steps of a house, and said, “Now look! The blind man sat on those steps with his cane in hand. But when he heard that Jesus was passing by, he was so sure that the would be healed that he let the cane lie there and he went to Jesus fully expecting to see!”

Mark and Luke add that Jesus said “thy faith hath saved thee.” But it wasn’t just their faith. It had no power to open their eyes, but it led them to Jesus. Likewise faith has no power to save from sin, but it leads the blind sinner to Jesus who has the power. Jesus “touching” their eyes was a sign that the power of healing proceeded from him, as it is for the sinner.

Matthew Henry put this miracle in perspective: “These blind men, when they had received sight, followed him. Note that none follow Christ blindfold. He first by his grace opens men’s eyes, and so draws their hearts after him.”

How do we approach the Son of David with our request? How do we answer when asks us what we want? Are we approaching Him and asking in strong faith or just in hope. Do we leave our cane behind, leaning on the house?

This Wednesday’s Video Challenge
006 – Does God Really Talk To Me?