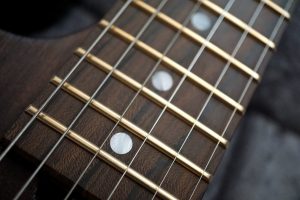 I just finished shooting the video challenge that is scheduled for July 22, 2020 about God speaking to us. In the video I mentioned that as a writer I depend upon God to tell me what to write. One of the most frequent ways He uses is to show me pictures when I’m studying or reading the Bible. He will often show me a picture when I’m talking to someone and as they are speaking I am seeing a picture about what they are saying. I know, it gets weird sometimes, but those pictures either answer a question I have asked God or they paint a picture that becomes an article, a blog post or even a book.

Well it happened the other morning as I was spending some time in the Word. I came across Psalm 37:8 and in the midst of reading it I got a strange picture…

Ps 37:8 Refrain from anger, and forsake wrath! Fret not yourself; it tends only to evil. ESV

I read the word “fret” and I saw a picture of the neck of a guitar. I used to play back in the hay day of folk music and so I knew what I was seeing … but why?

So off and on the rest of the day I kept thinking about the word “fret.” Now I know what David meant, but why the guitar. So, very spiritually I went to Wikipedia and there it was…

Fret is often used as a verb, meaning simply “to press down the string behind a fret.”

David told us to fret not. Fret is the Hebrew word meaning to heat oneself in vexation. In other words, when we fret about something we get all upset and if we’re not careful it can turn into anger or even rage. It’s easy to say but not fretting about something is often difficult to do. Fretting usually springs from our determination to get our own way and not wait on God to reveal His way.

So far so good, but a guitar?

If a guitar player puts his finger on the fret rather than behind it the note is distorted because the finger is sitting on the string and not the space behind it. The downward pressure needs to be focused on the string behind the fret. It’s the same for us. If we don’t put our focus (our pressure) on what’s behind the fret we’re dealing with the outcome will be equally distorted or unclear.

David tells us that we are to cease from anger because if we allow our mind to focus on it, it will likely result in “doing evil” by responding with harsh or spiteful remarks. We’re to focus behind the fret and remain entirely calm and composed. To meet “evil with evil” is only going to add fuel to the fire and take the outcome out of the hands of God. His way is to “press down” by trusting, delighting in and committing to His way and waiting patiently for Him to resolve the issue.

We see the same advice from James…

James 1:26 If anyone thinks he is religious and does not bridle his tongue but deceives his heart, this person’s religion is worthless. ESV

James 3:8-9 but no human being can tame the tongue. It is a restless evil, full of deadly poison. With it we bless our Lord and Father, and with it we curse people who are made in the likeness of God. ESV

Many times in my early days of playing the guitar I was so focused on the right place to put my fingers that I would often find my fingers on top of the fret and frustration always ensued. So it is today when I allow my focus to be on the current “fret” and not on the direction of the Holy Spirit to focus behind it and not let it escalate.

Told you the Lord works in strange ways with me, but He is faithful to deliver a message with every picture He shows me. There is always a lesson for me to learn and to share. It helps me to keep my “chords in life” focused on Him… right where they should be … behind the fret.

This Wednesday’s Video Challenge
004 -Who Is Christ In You