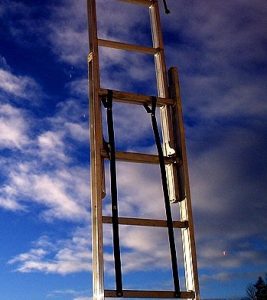 Paul painted a picture for me the other morning that developed into a rather long discussion with the Lord. It involved a hard look at my life and all of the twists and turns it has taken over these many years. And at the center of that picture (discussion) was a ladder, leaning against a wall. As I looked at that wall I saw that it wasn’t just “one” wall, but that it represented many walls… many walls in my life. And at each wall there was the same ladder… my ladder!

Gal 1:14-16 And I advanced in Judaism beyond many of my contemporaries in my own nation, being more exceedingly zealous for the traditions of my fathers. 15 But when it pleased God, who separated me from my mother’s womb and called me through His grace, 16 to reveal His Son in me, that I might preach Him among the Gentiles, I did not immediately confer with flesh and blood,

What struck me was how Paul had “set” his ladder against a wall, the top of which was beyond many of my contemporaries. In his honest efforts to serve God he was climbing “his” ladder that “he” set against the wall that would take him above all the others in his service to God. As I thought about that I reflected the many walls that I have set “my” ladder against in order to get to the top. But in every case, when I reached the top it was ultimately only a fleeting reward. Soon the accomplishment waned and I had to find another wall on which to “set” my ladder. Every time I reached the top of “my” wall there came an eventual time when I would find myself down at the beginning of a “new” challenge, a new wall… and it would start all over again.

Sadly… my walk with Jesus followed the same pattern as I determined the walls I would climb. And at the top I encountered the very same thing. And as I read Paul’s words, as I looked at the picture the Holy Spirit was painting for me, I understood why there have been so many walls in my life. I had not followed Paul’s example… I did not immediately confer with flesh and blood. I realized that many times I had set my ladder against those walls that would “advance” me beyond my contemporaries; I conferred with myself. Advanced in the NKJV doesn’t put it in perspective as the word “profited” does in the KJV… prokoto… to make progress; to make progress beyond others.

Like a businessman, Paul had been making a name for himself by making great strides in the “Jews” religion. He was the Sanhedrin’s fair haired boy to be sure. He was climbing the ladder to success but when he finally reached the top he discovered that it was against the wrong wall! He was advancing the “Jew’s” religion (the Law) but was getting nowhere. He stood at the top of the wall and came face to face with the very One he had been persecuting on his way to the top in his zealous pursuit of what “he” believed was his true calling. On that fateful day on the road to Damascus Paul took down his ladder and set it against a new wall.

I think we need to stop and consider the wall to which we have place our ladder. Is it, no matter the motive, the wall that God has called us to scale? Is it the wall that leads to a closer relationship with Jesus? Or is it the wall that we have determined to scale by conferring with our “natural” instincts and desires?

If we put our ladder against the wall the Lord has set before us we will discover that it has a top… but it is far above our ability to reach it. Is it the wall of faith or the wall of works? Is it the wall of trusting or trying? The only way to scale the wall of faith and trust is to allow the Holy Spirit to lead us ever upward… one rung at a time… one day at a time. One rung and one day are all that we are to focus on, they are all that we can and are asked to consider. And along the way He will provide us with the wisdom, strength and provision needed to take the next step up the ladder without slipping or falling. How far, how long? We have no way of knowing, but one thing is certain. What awaits us at the top is worth every step we are required to take… some steps easy and some difficult and some seemingly impossible. Those are the most difficult because they “are impossible” in our own strength.

We need to make sure we are climbing the right ladder up that very “personal” and “individual” wall the Lord has set before us. For that is the only way we will truly find our way to the top, and be conformed to the image of His Son. And what better reward can there be in this life than to finally reach the top of “His” wall and hear those precious words…

“Well done, good and faithful servant; you were faithful over a few things,
I will make you ruler over many things. Enter into the joy of your lord.”

Download a PDF or Kindle ebook of "The Foundations of Faith. It's free gift to you — all that we ask is you Tweet or Share on Facebook that you are reading Tom’s book and help us spread this critical message to the bride of Christ.