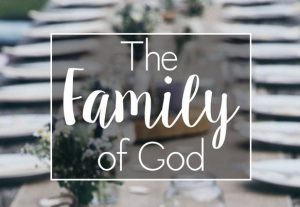 John 1:12 But to all who did receive him, who believed in his name, he gave the right to become children of God. ESV

This is an interesting verse. To everyone who receives Jesus, God has given the power to become a child of God. The word “son” used here is teknon and means a child that is produced by seed; a natural born child. Jesus is the only “natural” child of God, everyone else is adopted into His family. Note the word power in verse 12 (exousia)  means “jurisdiction.” We have the “right” to become His child but not of ourselves; by His Spirit. We are Children of God (teknon) by a spiritual new birth, but becoming a Son of God by resemblance (huios) is a result of our action.

Rom 8:14-21 For all who are led by the Spirit of God are sons [huios] of God. 15 For you did not receive the spirit of slavery to fall back into fear, but you have received the Spirit of adoption as sons, by whom we cry, “Abba! Father!” 16 The Spirit himself bears witness with our spirit that we are children of God [teknon], 17 and if children, then heirs—heirs of God and fellow heirs with Christ, provided we suffer with him in order that we may also be glorified with him. 18 For I consider that the sufferings of this present time are not worth comparing with the glory that is to be revealed to us.

19 For the creation waits with eager longing for the revealing of the sons of God [huios]. 20 For the creation was subjected to futility, not willingly, but because of him who subjected it, in hope 21 that the creation itself will be set free from its bondage to decay and obtain the freedom of the glory of the children of God [teknon]. ESV

In verse 14 those who follow His Spirit are called the Sons of God (huios) because they resemble Him (become like Him in character, conformed into His image). In verse 16 they are called the Children of God (teknon) because they are born of the Spirit. It’s like a little child (teknon) who doesn’t begin to resemble his father until he begins to mature (huios) and take on the character of his father. We see this all the time as children begin to grow and spend time with their parents. The more they relate to them the more they resemble them in their beliefs, actions, and appearance. And as I grow older that reflection in the mirror looking back at me has become more like my father.

This is what all creation is waiting for, the bride of Christ maturing from teknon to huios; moving on from the cross to spiritual maturity. Re-read verse 19 very carefully and note that “all creation” is waiting for us to manifest as the Sons of God (huios) in full maturity at His Second Coming. We have a lot to do with the maturing process and we need to grow from the milk of the Word (1 Pet 2:2) to the meat of the Word whereby we will resemble Him more as we become huios. We will not be fully like Him until we see Him face-to-face, but we can, by the work of the Holy Spirit, come very close. That’s the meaning of Romans 8:29 For those whom he foreknew he also predestined to be conformed to the image of his Son, in order that he might be the firstborn among many brothers. ESV

That’s the work of our betrothal to the King of Kings; that’s the goal that God has put before us. And that is why He as given us His Holy Spirit, to lead us on our journey from teknon to huios.