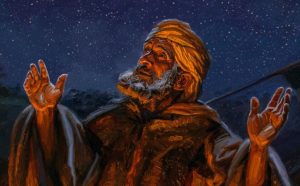 Rom 15:4 For whatever was written in former days was written for our instruction, that through endurance and through the encouragement of the Scriptures we might have hope. ESV

The Holy Spirit teaches us solely from the Word of God, and He can teach us from any part of it.

Matt 4:4 But he answered, “It is written, “‘Man shall not live by bread alone, but by every word that comes from the  mouth of God.'” ESV

Often times we tend to overlook the Old Testament by considering it just history without fully understanding what it says. Take the story of Abraham as told in the New Testament for example.

Heb 11:8 By faith Abraham obeyed when he was called to go out to a place that he was to receive as an inheritance. And he went out, not knowing where he was going. ESV

This verse leaves the impression that Abraham got the Word from God and immediately stepped out, hardly pausing until he reached Canaan. But turn back to the original story in Genesis and we discover there was actually a long delay. It took Abraham several years to obey God’s command. In fact he did not leave Haran until his father died, delaying fulfilling the command God gave him (Acts 7:2-4). But all the time God had His eyes upon Abraham, as well as the goal He had set for him and his journey to get there. God sees us just as He saw Abraham along his journey:

He sees our Destination already complete in Christ:

Col 2:9-10 For in him the whole fullness of deity dwells bodily, 10 and you have been filled in him, who is the head of all rule and authority. ESV

Then He sees us Where We Are and continues to work with us along our journey to the goal:

Rom 8:29 For those whom he foreknew he also predestined to be conformed to the image of his Son, in order that he might be the firstborn among many brothers. ESV

Then He reminds us of His Promise:

Phil 1:6 And I am sure of this, that he who began a good work in you will bring it to completion at the day of Jesus Christ. ESV

Going back to our opening verse and applying it to the story of Abraham we are encouraged that the story was written for our Instruction that through Endurance and the Encouragement of the Word we will have Hope; hope in the promise of God that we will attain the goal He has set for us. And He will keep His promise that He will complete what He has begun because He already sees it fully accomplished; all of it … The Place, The Path, and The Promise.

2 Responses to “The Place – The Path – The Promise”