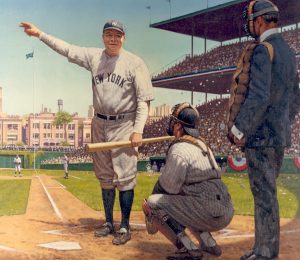 Over the years I have not only heard a scripture used in conjunction with faith, I have used it. But when I really studied it out in light of what the Holy Spirit has been revealing to me, I came away with a different perspective. In fact, it is a perspective that contains a much deeper truth about our faith and our relationship with Jesus. Here is the scripture…

Romans 4:17, 18, 20-21 As it is written: “I have made you a father of many nations.” He is our father in the sight of God, in whom he believed—the God who gives life to the dead and calls into being things that were not…  Without weakening in his faith, he faced the fact that his body was as good as dead—since he was about a hundred years old—and that Sarah’s womb was also dead. 20 Yet he did not waver through unbelief regarding the promise of God, but was strengthened in his faith and gave glory to God, 21 being fully persuaded that God had power to do what he had promised.

I know I am not alone in relying on these verses when standing on a promise that God has made me. And while I am not saying that is in error, I am saying that it has a more direct impact on who we are as Jesus’ bride and what He expects of us. Take a look at what Paul writes to the Ephesians…

Eph 2:5-6 Even when we were dead in sins, hath quickened us together with Christ, (by grace ye are saved;) 6 And hath raised us up together, and made us sit together in heavenly places in Christ Jesus:

Consider how Jesus views us: He “quickened us” – “raised us” – “seated us.”  Each of these actions is in the past tense; He has already completed the process in His atoning sacrifice for us. So, if we reflect on His vision for each of us (to be conformed into His image), we realize that He has already given us all we need to fulfill that vision.

Now go back to what Paul wrote to the Romans… the God who gives life to the dead and calls into being things that were not. He calls those things that are not as though they were. What does it mean “that were not?”

In God’s eyes, we have already been justified, sanctified and glorified in Jesus. But, it is yet to be walked out (worked out) by us as we allow the Holy Spirit to make those truths a reality in us; clearly visible to those around us. And for us, that means we need to call into being those things that are not. We need to call our sanctification and glorification as completed; put our faith in God’s word that they are already a fact. Why? Because that is the truth, the promise we can stand on in the face of the enemy’s lies to the contrary. We need to understand that what we call as “not” is only “not” from out perspective.

So… what’s my point?

We need to live the truth. We are saved, we are called, we are justified, we are sanctified and we are glorified. Just like Abraham was the “father of many nations” when it appeared that he was far from it.

So… we need to change our perspective…

Stand on the truth by calling it the reality that it is, and set our heart on the very place where that truth exists and not on the world around us. Call it what it is because all of heaven stands behind it. We are already complete in Jesus, we just need to walk it out. Then we will hear those awesome words…

Matt 25:21 His lord said unto him, Well done, thou good and faithful servant: thou hast been faithful over a few things, I will make thee ruler over many things: enter thou into the joy of thy lord.