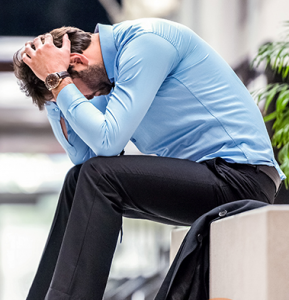 As I sat there bemoaning the long wait and my growing anger at the delay I closed my eyes to try to make the long line in front of me disappear. I don’t remember what I was thinking about but it was interrupted by that still small voice in my heart… Tell him that I love him! I have to admit that it caught me clearly off guard and I looked at the man sitting next to me and… I went back to thinking about what I was before being interrupted (yes I did). A few moments later I heard it again…  Tell him that I love him! I looked over at the man who was deeply lost in thought with his head in his hands and I convinced myself not to bother him. I stared straight ahead and began to wonder whether I should say something and entered into a discussion between my flesh and The Spirit.

I don’t know how long I sat there with my eyes closed, coming up with reasons not to turn to this complete stranger and tell him that Jesus loves him. Well, all I remember is that my flesh eventually lost the battle and I turned to be obedient to the Spirit… he was gone! I looked everywhere for him but couldn’t find him inside or outside of the building. I was devastated and as I returned to my seat I just hung my head and asked for forgiveness and that the Holy Spirit would send a worthy child of God his way to deliver the good news that I failed to share.

2 Cor 10:4-5 For the weapons of our warfare are not carnal but mighty in God for pulling down strongholds, 5 casting down arguments and every high thing that exalts itself against the knowledge of God, bringing every thought into captivity to the obedience of Christ,

Sometimes I can get so focused on my life and “working” for the Lord that I completely miss the spontaneous opportunities that God puts in front of me; especially for my family. And as I look back at that morning at the DMV I realize that delivering that precious message was not just about encouraging someone who was in need. It was also about God giving me an opportunity to be obedient to His Word and receive the blessing that accompanied it. But I was so focused on hearing what I wanted to hear and not what the Holy Spirit was saying.

I think Chambers hit the nail on the head for me…

It is inconceivable, but true nevertheless, that saints are not bringing every project into captivity, but are doing work for God at the instigation of their own human nature, which has not been spiritualized by determined discipline… We are apt to forget that a man is not only committed to Jesus Christ for salvation; he is committed to Jesus Christ’s view of God, of the world, of sin and of the devil, and this will mean that he must recognize the responsibility of being transformed by the renewing of his mind.

Discipline brings obedience which overcomes the fear that hides a multitude of blessings… No, not a quote from someone, just a lesson that I seem to find my self revisiting from time-to-time as that man’s face rises up before my eyes.