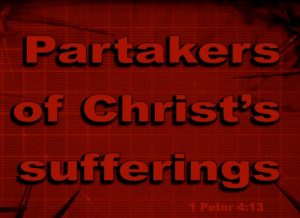 There have been many times in my life (in our married life) when God has taken us through some dark and lonely times. It has taken me a long time to understand that those times of suffering were not necessarily what I perceived them to be. They weren’t always for the purpose of dealing with something in my life. They were meant to make me useful in His hands; to enable me to understand what happens to others so that I won’t be surprised when He leads me to someone who is suffering in the same way. It’s His way of making me a “partaker.”

1 Peter 4:13 But rejoice insofar as you share [partake] Christ’s sufferings, that you may also rejoice and be glad when his glory is revealed. ESV

It is only as the bride of Christ that we can understand what He is after during these times of suffering. Because we have been created in His image, it’s ingrained in us to know what His aim for us is. Unfortunately for many, the response to these opportunities to suffer is to evade them altogether. It’s often our choice not to be identified with the sufferings of our bridegroom and we opt to take a shortcut of our own and evade God’s way … the long way.

I needed to ask myself the hard questions: Am I a partaker of Christ’s sufferings? Am I prepared to leave my personal ambitions behind ? Am I prepared to not know where or why the Holy Spirit is taking me through the trial?

I have learned, painfully, that I won’t always know why I’m being put through suffering at the time. I have also learned that I need to press on in spite of that until I come to the place of understanding, and that moment comes when He brings someone into my life that is suffering in the same way. It’s then that I realize that the suffering was not for my benefit, it was for the benefit of others.

It’s a worldly statement but “been there, done that” has true meaning in God’s economy when you can come alongside someone and be the voice of understanding, encouragement, and love that brings hope. The hope that God will be there with them during the trial, that they are not alone, and that the suffering will eventually come to an end and they will be glad when His glory is revealed in them.

We all want to grow spiritually in Jesus but when the suffering that leads to growth appears we often choose the path of woe is me rather than the path of God, have your way in me, which is the way of preparation for us to used by Him in someone’s life. The world calls it pay if forward. God calls it being used by Him for His glory.

Rom 5:3-5 More than that, we rejoice in our sufferings, knowing that suffering produces endurance, and endurance produces character, and character produces hope, and hope does not put us to shame, because God’s love has been poured into our hearts through the Holy Spirit who has been given to us. ESV